It began in February 2016 with a meeting convened by the U.S. Science and Technology Advisor to the Secretary of State at the National Academy of Sciences in Washington, D.C. This initial meeting involved the four S&T advisors to foreign ministers from Japan, New Zealand, United Kingdom and United States along with diplomats from twelve other nations: Chile, Ghana, Kazakhstan, Kenya, Malaysia, Oman, Panama, Poland, Senegal, South Africa, Ukraine, and Vietnam.

A few months later, Senegal became the next member of FMSTAN. And in 2017, Oman and Poland joined the network. Since then, the network continues to grow and now numbers members from well over 20 countries.

This nascent global network is focusing initially on four areas to articulate the benefits of investing in internal S&T advisory capacity within foreign ministries to more fully complement external capacity:

S&T advisors to foreign ministries are not necessarily experts on all scientific matters, but they understand science and know where to find the most appropriate expert on any given topic. They have the skills to explain evidence required for informed decision-making about foreign affairs, serving as evidence brokers in our increasingly trans-boundary world with constantly emerging complexities. They utilise their roles as evidence brokers to reveal options that contribute to informed decision-making by nations across the international landscape.

Membership to the FMSTAN network is by invite only, but select resources developed by the members will be made available to the INGSA network as teaching or advisory tools. See the resources at the bottom of this page.

FMSTAN meetings will generally take place as a side meeting alongside events organised by INGSA’s Special Interest Division on Science Diplomacy – SPIDER. For anyone interested in discussions around Science Diplomacy you are welcome to join SPIDER following the information on the SPIDER page.

If you or your Foreign Ministry as a high-level science advisor that would like to join the FMSTAN Science Diplomacy Chapter contact: info@ingsa.org

FMSTAN has been active during the 2020 pandemic, hosting several virtual meetings of FMSTAN members to both maintain contact between members during this critical time, and to strategise on the role that Science Diplomacy, Foreign Ministries and FMSTAN can play in the management and recovery of COVID-19.

It has been a fruitful action and we hope that some major initiatives will result.

The INGS2021 conference will now primarily be an online event. We hope that FMSTAN members will be able to join some of the conference as Science Diplomacy will be a common thread in the discussions. More information on the themes of INGSA2021 can be found here. Depending on the timing and the utility to the network, an online meeting of FMSTAN mightbe planned to coincide with the conference.

We will update all FMSTAN members on any plans as they are made. Regretfully, the Geneva meeting of SPIDER and FMSTAN was postponed due to COVID-19, with the hope that a physical meeting will be able to take place once international travel has recommenced

INGSA would like to thank the interest of our partners. 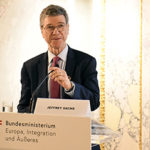 The November 2019 meeting of SPIDER/FMSTAN took place in Vienna, in collaboration with the Austrian Ministry of Foreign Affairs, IIASA, The Diplomatische Akademie Wien and the Natural History Museum Vienna.

The 2-day meeting brought together almost 80 people from around the world for a joint meeting with the SPIDER network, to discuss the pressing issues within Science Diplomacy. Thanks to the fantastic work of IIASA and the Ministry, participants were treated to a keynote from Prof Jeffrey Sachs.

Other topics of discussion included:

In conjunction with the Ocean Economy & Future Technology Conference

In collaboration with the International Forum Science and Technology Diplomacy (IFSTD), FMSTAN hosted a vibrant meeting concurrent with the 2019 Ocean Economy & Future Technology Conference to be held in Muscat, Oman from the 11 – 13 February 2019.

The members of FMSTAN also met in a joint session with the SPIDER network to discuss how the two groups can collaborate and drive the global debate around Science Diplomacy. It was a valuable meeting on all fronts and set a strong precedent for future meetings.

The FMSTAN meeting at the #INGSA2018 conference in Tokyo was a more informal affair, bringing together FMSTAN members with relevant stakeholders to discuss the future direction and focus of science diplomacy and continued to outline the work programme for the network.

The meeting was embedded in what was a highly successful conference for INGSA, a conference that attracted a truly global attendance and that further raised the awareness of science diplomacy as a discipline of growing importance.

In May, the FMSTAN was invited to host their next meeting in the margins of the 21st session of the UN’s Commission on Science & Technology for Development (CSTD). The 2-day meeting in Geneva brought together representatives from the foreign ministries of 18 countries, as well as important guests from the World Bank, CERN, and CSTD among others, to discuss the challenges and opportunities of Science Diplomacy, the role of science in the SDGs, disruptive technology and transnational advice in emergencies.

The workshop was widely considered the network’s best and most engaging meeting to date and represents the ongoing growth and value of a high-level group devoted to the role of science and evidence provision in countries’ foreign ministries.

The 2nd FMSTAN meeting in Talloires, with hosts Tufts University European Centre and the Science Diplomacy Centre, brought together an impressive number of countries foreign ministry’s advisors for a meeting that set the tone and direction for the development of the network. 18 countries were in attendance, for a vibrant and important meeting that coalesced the intention of the network.

Below is a short list of resources that give some background to the origins of FMSTAN and the field of Science Diplomacy:

For access to more resources, see the INGSA resources pages.